You don't have to rewrite all the existing data from your Excel file into Tabidoo. You can simply import all the data from the Excel file to Tabidoo within a second.

You don't have to rewrite all the data from your Excel file into Tabidoo, you can simply import all the existing data from the Excel file to Tabidoo within a second.

Tabidoo supports the import of the following formats:

How to Import data from Excel

If you want to make an entirely new table in Tabidoo by importing from the Excel file, you just have to follow this step:

How to import data from the Excel file to Tabidoo

When you have more than one sheet in your excel file, all the sheets will be imported as separated tables to the Tabidoo. That means if you have two sheets in Excel called for example "Customers" and "Orders". They will be imported into Tabidoo like two tables with the same names.

How to update data in Tabidoo by Excel

In case you want to just update your already existing data in Tabidoo by importing from Excel, you have to do the following:

The import key column can not contain any duplicates. Otherwise, the error will appear while importing data.

The first field in the table is automatically preset for a user as the import key field. 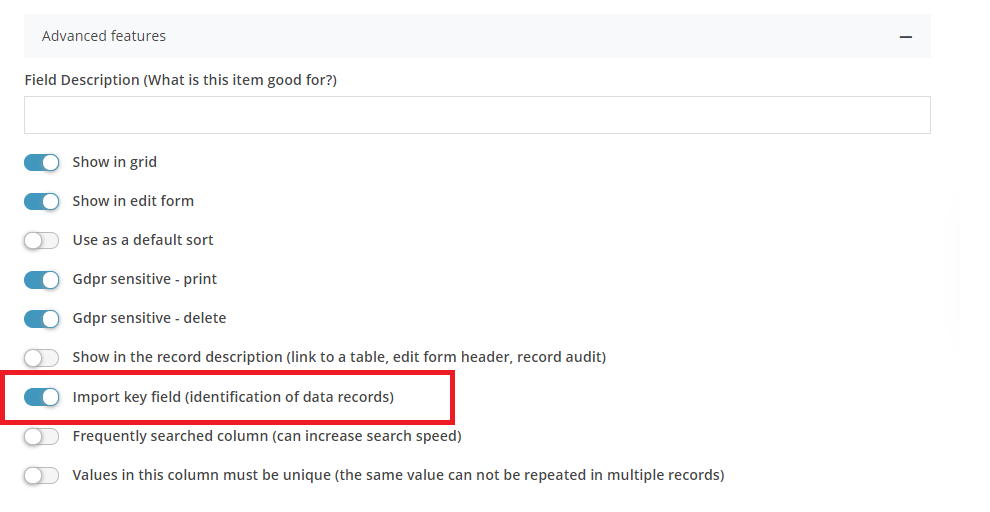 Afterward, these options will appear:

How to import only some columns from Excel

In order to import only some chosen columns from the excel sheet, you simply need to delete all the columns in the Excel sheet which you do not want to import and leave only the selected ones + the Import key column.

How long does it take?

Depends on the size of the Excel file - the number of columns and rows in the Excel and the complexity of the data (number of links, numerical series, calculated fields). The import can take from a few seconds to minutes.

However, if the import is about to take a longer time, it will be automatically processed in the background while you can get back to work and use your Tabidoo freely.

Some data are calculated asynchronously (e.g. links, number series, calculated fields), which means that they will be automatically added to the data after import. Therefore, do not worry if they are empty immediately after import.